Neelagnni N Das, a VJRC student reporter; 23rd November, Kolkata; On Wednesday, Vijayagarh Jyotish Ray College’s Journalism and Mass Communication Department organised a special lecture on Global Media and Politics. The lecture was given by Mr Sujit Roy, a famous educative demonstrator of journalism, and a trotter in the multifarious areas related to media & information. He is a truly passionate journalist who has experienced and covered many historic events, both national and international in his journalistic career in many languages such as– Bengali, English and Hindi. He is also a vociferous reader and a prolific writer; he has written several books – all-time best sellers since those published, in the category, meant for the students and trainees in journalism. The lecture began at 12:15 PM, the students of the department, from freshmen to seniors, attended this special lecture with great enthusiasm, making it a house full. Mr Roy starts off the lecture with the line “Everything in the universe, including the universe itself, is just information…” He talks about how all interactions of elementary particles in the universe convey some sort of information. Explaining that information is the basis of everything, and it can be found everywhere, “So observe everything…you never know when you might find news.” Mr Roy explains the history of Global Media and International Communication, by giving the example of how at first humans were only nomads, before they learnt to farm and settled down, and how after settling down, humans started creating counties and kingdoms. “When the man started to form communities with borders, International communication was born.” He expounds how global media is key, by articulating that “Information compels a man to take actions…global media relays information from all around the globe to a man…so he could take actions which affect and/or are relevant to the world’s current situation.” He then describes information disparity to the students, who were continuously scribbling down notes of everything he was saying, “Economic disparity can and will cause information disparity… In the past a nation with a weak economy would face difficulty buying even the most nominal news from a nation with a strong economy, it has to wait and hope that the strong economic nation gives it some spare change news… whereas a nation with a strong economy could easily buy any and all news from a poor economic nation and choose what news to show their public. ” He elucidates how this problem of information disparity has been somewhat solved after International News Agencies were formed. But he then goes on to say about how a new problem arose, which was that there was too much news, the poor countries didn’t have enough budget to buy all the news so they had to choose carefully, and the rich countries bought everything which caused their public to be overloaded with different news. This problem he says was solved by the creation of a Non-aligned news agency pool. He goes on to talk about the Non-Aligned Movement, “NAM is a forum of 120 countries that are not formally aligned with or against any major power bloc… The goal of NAM is to maintain the national independence, sovereignty, territorial integrity and security of non-aligned countries in their struggle against imperialism, colonialism, neo-colonialism, racism, and all forms of foreign aggression, occupation, domination, interference or hegemony as well as against great power and bloc politics.” “NAM gave birth to The Non-Aligned News Agencies Pool or NANAP for short…it operated as an international, collaborative, charges-free, and institutional cooperation between news agencies of the Third World. Its main goal was to provide their own mass media channels with news which would be unbiased.” says Mr Roy. He then told the students about the MacBride Report, “It is also known as Many Voices One World, and was written in 1980 by UNESCO…It was tasked with analysing communication problems in modern societies, particularly relating to mass media and news, considering the emergence of new technologies, and suggesting a form of communication in order to reduce obstacles to further peace and human development.” He talks about some of the problems the report identified like– concentration of the media, commercialization of the media, and unequal access to information and communication. He also tells the students about some of the things the commission called for like– the democratization of communication and the strengthening of national media to avoid dependence on external sources, etc. He educates the youngsters, that they as budding journalists know what to share, even if they have the freedom to share everything, for what they publish will have an effect on society, so they have to be careful. He also says that information cannot and should not be suppressed and that communication is a key factor in the development of humanity as a whole. He expresses his views, saying that UNESCO should do something about the high costs of creating newspapers in more environmentally friendly ways. He also claims that the entertainment media should take responsibility to help the section of society which needs progress and that the government should partially waive the charges and taxes on the distribution of news to the public. He also briefly expands upon the connections and networking capacity of various news agencies such as The Agence France-Prean, Associated Press and Reuters. The enlightens the students by talking about The Free Press of India, “It was founded in 1925 by Swaminathan Sadanand, during the period of the British Raj.” Mr Roy also brings light to the issue of political pressure on journalists and the censorship of media, he voices his opinion that new policies about media and press which are relevant to the current situation of the country and related to the global policies created by the UNESCO should be implemented by the government. He ends the lecture by telling the students to always observe everything as information is everywhere and to be mindful of what and how they present news.

A first-semester student pursuing B.A. in Journalism and Mass Communication from Vijayagarh Jyotish Ray College. He has written this report on the special lecture on Global Media and Politics which was given by Mr Sujit Roy and organised by Vijayagarh Jyotish Ray College’s Journalism and Mass Communication Department. He would like to thank the principal, Dr Rajyasri Neogy and the teachers, Dr Arnab Kumar Banerjee, Sri Sunandit Chaudhary and Dr Bakul Srimany for giving me the chance to write this report and for guiding me throughout the way. 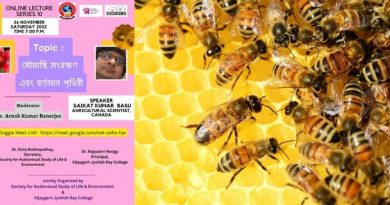 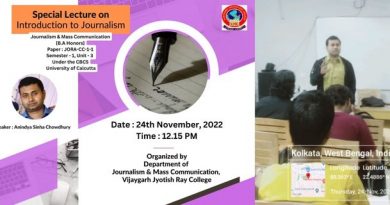 Diploma in Financial Accounting with GST